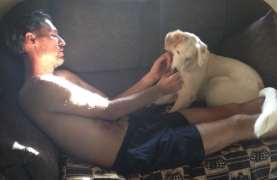 Dan and his worried nurse Ned.

Dan recently posted how he had helped out a couple of kids struck down with malaria. Ironically, when he had picked them up and took them to the health clinic and hospital he didn’t realise that he also had malaria!

We thought Dan was getting a cold/flu, typical running nose, etc. And although his legs were a bit sore we put that down to a recent charity run. He returned home yesterday afternoon feeling terrible so we tested him  with a rapid diagnosis test (RDT) we had at home and it was positive. Thankfully our Kiwi doctor friend had insisted in the past that we had a malaria treatment course on hand in case of an emergency (you’re the best Nick!) We also have an Aussie nurse on speed dial and she helped us walk through the early treatment (thanks Tash!)

He had a pretty high temperature yesterday, however today it has dropped a lot. The meds seem to be kicking in! Praise God for governments and charities who have subsidised these drugs to make them so readily available here.

So… in case any of you are wondering, what is malaria and how do you get it? It’s a disease of the blood that is caused by one particular type of mosquito (the female Anopheles mosquito) – and one bite is all it takes. Once you are bitten with an infected mosquito, then the parasite enters your body. It then multiplies in your liver, and roughly two weeks after entering it bursts into the blood stream where it infects red blood cells. If untreated, it can be very bad (and even fatal), but – hey we are treating! An unaffected mosquito becomes infected when it bites (feeds on) someone with malaria.

Thanks to billions in funding from governments and NGOs around the world, malaria treatment is easily available here

Some may suspect he wanted a few days to watch his latest DVD series, but he would never admit that!

The rapid diagnosis test. A line through ‘C’ for control means positive.