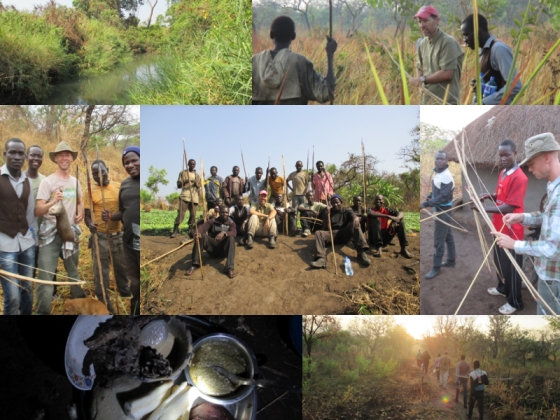 My work has started off brilliantly; I am really enjoying the work that I am doing and also really love the people I am working with.

Recently most of the office staff went out on a hunting trip to a village north of Gulu called Paicho pronounced – piecho. Some of the youth of this village recently came out to The Recreation Project (the NGO I volunteer with) for a day of team building and life skills training and invited us all to go hunting in their village. We were hunting a little animal called Anyeri pronounced – (I still can’t say it properly so…!!). It looks similar to a very big rat without the long tail. They are considered a bit a delicacy here although I’m still to be convinced.

We left late in the afternoon for the trip as we planned to stay the night so as to have an early start for the hunt. The journey was the usual bumpy ride weaving from side to side to avoid the gutters, corrugations, oncoming buses (unwritten law here of giving way to the bigger vehicle even if they are driving on the wrong side of the road which means you may have to go bush) and people who only seem to move out of your way only after you have tooted them (although that doesn’t always work…).

We arrived safe and sound (not sure all of us were sound) to the beaming smile of Bernard, who was to be our host for the next 24 hours. And host he did! On arrival we were taken on a quick walk around some parts of his farm and then down to the river which was more like a stream (primarily as it is the height of the dry season at the moment). It really made you appreciate how simple life can be but also how hard the village people work to send their children to school but also to put food on the table.

On returning, we lit the fire and hoped for a relaxing evening telling stories and yarns over a nice plate of food, well that’s what we were thinking! At about 9pm we still hadn’t eaten, we were starting to send out SOS messages to our colleagues as to if food was coming. Although the response was yes I could see they were starting to doubt also.

So Bernard joins us again around the fire and tells us we are going hunting now – for HONEY! At this I was worried as from past experience this hasn’t ended well for me. All we have quite literally are the clothes on our backs to protect us, but off we trudge into the darkness to find the hives. We eventually come across 3 hollow longs that have been placed in the fork of low trees which have been inhabited by the dreaded African bee. I wasn’t keen on getting too close as my arms and head were completely exposed but my African colleagues were all up for the challenge. Their biggest fear was about getting bees down their shirt and getting stung, so they thought it would be better to take them off! I think they were thinking the bees couldn’t see them in the dark also… So now we have 3 topless men blowing smoke into bee-infested logs trying their level best to push the bees deeper into the log. And believe it or not it was working, although there was the odd bee that didn’t follow the desired program and decided for the sake of the hive to commit the ultimate sacrifice. We ended up robbing them of about 2kg of honey. So all in all it was a successful start to the hunting.

We arrive back at about 10pm to find dinner is served. This was my second time of eating Anyeri, and although it tasted a little better I’m still not convinced it is meant for human consumption. My saving grace was that it was indeed dark and I had a dog beside me…

So the next morning we awoke or should I say opened our eyes, as I’m not sure there was too much sleeping happening. There were 6 of us on 3 mattresses and one of those was a single! So we started off on our hunting trip, we were given a spear and a few bow and arrows which we had a brief practice with; that alone was a bit embarrassing and confirmed to me that this Anyeri was going to be as safe as a house!

We started out on a path north with one person who knew what they were doing and 5 joy riders that possibly presented Mr Anyeri with 5 lives. While walking this path we came across the rest of the hunting brigade and their dogs (always a worrying thing meeting a group of men with spears and their dogs on a village track). Well they all seemed to be very friendly and were well up for a hunt.

From that point the hunt began immediately! This meant trudging through 4 foot high grass trying to see any movement below. If you did see any movement you would yell out to the dogs and start running whichever direction you think it went. This was pretty much a needle in a haystack job. So after about 2 hours of walking in the hot sun I had all but given up and decided to give my weapon away and take pictures. Coming down a small hill in the middle of nowhere hoping at any minute someone would pull the pin on this expedition, there is a commotion at the foot of the hill. It becomes very apparent that Mr Anyeri has been spotted. While trying to position myself for a good shot (remembering my only weapon is my size 10 boots) I see the spear from one of the hunters (professional I’m told) thrown into the high grasses and low and behold as he extends it back into the air Mr Anyeri is on the end of it.

So quietly I am still hoping that someone will give the call and it will be tools down for the day, but unfortunately the latest trophy has invigorated the group so we are off in totally the opposite direction I was hoping for! Well it wasn’t long before we stumbled across our next victim; a feral cat! This was more sport for the real hunters as it was quite literally – let the dogs deal with it. And believe me, they didn’t disappoint! I’m not going to go into detail here as I’m sure there are some cat lovers reading this that would prefer not to hear about the details. Just to say in fairness to the hunters, feral cats are very destructive to local wildlife…Hmm I think our group would be in the same group.