Times when I just don’t know what to do. 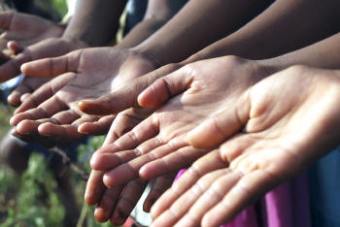 Lining up outside a shop in town waiting to buy some local popcorn, an elderly woman comes up to me, hands out-stretched, demanding for money. She grabs me by the hip as I walk past, still insisting. Walking past a bore hole in the village another elderly lady comes up to me, yelling in the local language that I give her money (that much I understand, even stipulating how much), she tries to grab at one of my pockets of my blouse to search for coins. Walking back home from school children yell out: ‘Madam, you give me ball, you give me toy’. Countless women come up to me and ask me to pay for their children’s school fees. The watchman signals to me as he opens the gate: hand actions for a soda. Being the only ‘white lady in the village’, and one of a small network of western missionaries and NGO workers in Gulu, I regularly see poverty and am often asked for money, food or other items. I have grown accustomed to the asking and have tried to respond in various ways: sometimes we have given food to beggers in town (but asked a local to do the giving for us so we aren’t seen as the ‘white face’ behind the food); sometimes we lend money to friends in a tough situation; other times we have offered them money in exchange for a service (such as cooking or washing clothes); then there’s the time when we ask them what they really need a soda for, or say that we want money too (now that certainly takes them by surprise).

We have done a lot of reading up on this topic and chatted with other missionaries and still don’t know what to do, even after a year and a half! On one hand we see the need, and we know that Jesus commands us to help the poor; however we have also seen that some giving has short-term benefits but long-term consequences. We are living in a post-war, post-charity-flood area where locals have grown accustomed to handouts. It is only in recent years that the World Food Programme and other large relief agencies packed up and decamped (probably across the border), however they have left a legacy of expectation, particularly when a white face is seen.

I guess the reality is we are moving from relief and rehabilitation through to development but there are so many people left behind. It’s hard to know how to really help these people.

Posted by Dan and Jodes on 21/05/2014 in Uncategorized and tagged begging, donation, hand out, poor, poverty, Uganda.